This will be a new weekly column dedicated to the history of advertising. Together we will explore the secrets of the great advertisers and the evolution of the media.

Since the dawn of civilization, people have felt a deep desire to communicate and let others know what was on their minds.

One of the hardest things, however, has always been to be more interesting than others. In the chaos of languages and words, attention must be captured to speak to as many people as possible.

Today we will go to the discovery of advertising from the Classical Age to the Second Industrial Revolution. We’ll be browsing here and there to find some centuries-old advertisements.

Maybe that offer of Egyptian papyrus paper, get 3 for 2, is still valid …

The oldest advertisement comes from ancient Egypt. This is an announcement on papyrus paper, produced by a weaver. A gold coin to anyone who found his fugitive slave. Following a small advertisement: “The shop of the weaver Hapù, where the most beautiful canvases in all of Thebes are woven, according to everyone’s taste.”
Congratulations Hapù, that of the tailor-made is a strategy that still works today. Who knows if the story of the slave and the gold coin were not a marketing gimmick too. 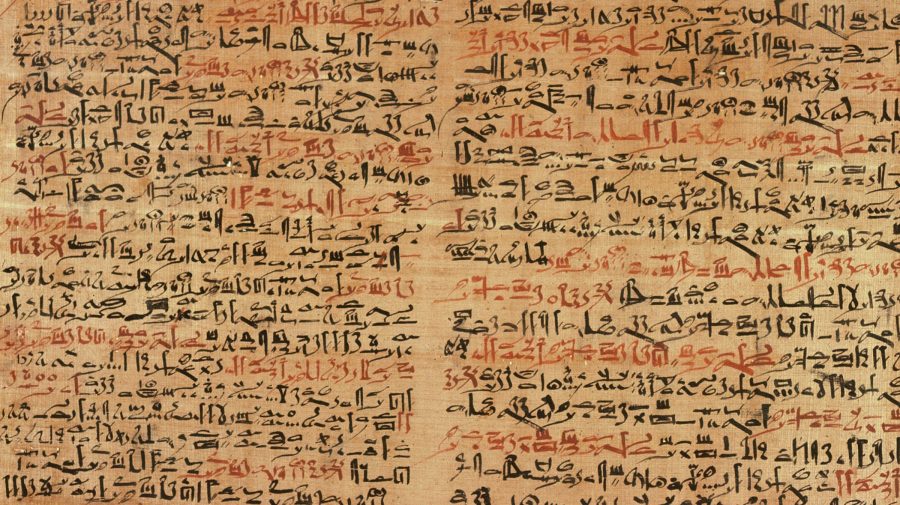 Let’s move forward a few centuries and here we are in front of the Parthenon in Athens. It is the beginning of a big business. The Greeks had colonized a large part of the Mediterranean coasts and trade was the basis of the cultural and social encounters of the time. We could say that the market was already saturated at the time and therefore advertising helped to restore the economic fortunes of traders. Here advertising was screaming. The great auctioneers announced their messages by breathing in the lungs to be heard throughout the square. Imagine having to make yourself understood in the middle of a crowded square full of merchants.

This tradition still survives today. In many Mediterranean markets, you can find the famous “cantatori”, fishmongers and fruit sellers, who exhibit their wares literally breathing the trumpets.

In Rome, the great Empire, things were not so different from the Athenians.
It was a globalized culture, where many different languages were spoken. In short, if someone had started screaming in the middle of a square, they would most likely have lost the opportunity to “buy” the fidelity of some Macedonian or Germanic dignitary.
Here then is that advertising evolves into a multicultural and understandable language for everyone. The use of images was born. What could be better than displaying product drawings outside your own shop? “Beautiful matron! Did you see what aubergines Claudius makes you find this morning? ”
It is precisely among the excavations in Pompeii that archaeologists have found murals with advertisements from the first century after Christ, displayed right outside the shops.
Hapù, would you ever think about it?

Of course, this also applied to political campaigns. In short, to get elected to the Senate, there were two possibilities, either to commission a statue in the forum or to hang billboards on the street. Guess which of the two vehicles was used the most… 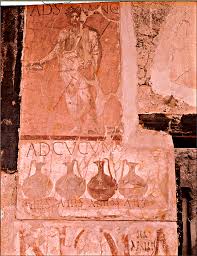 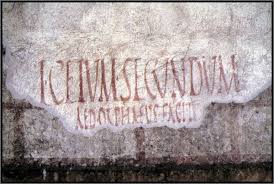 THE MIDDLE AGES AND THE REINASSANCE

It is known that nowadays advertising is a bit everywhere. We are bombarded with about 3,000 advertisements a day. This is a huge amount of stimuli for our brain.
In the Middle Ages, things were no different. Imagining walking in a village a few centuries ago. We would have been overwhelmed by hundreds of messages. Almost every shop was dominated by a gold, brass, or wrought iron sign. There was a kind of run-up to find the most beautiful sign than the competitors. Carpenters, goldsmiths, and stonemasons gave free rein to their graphic skills. Many authorities of the time found this practice rather excessive. An attempt was therefore made to mitigate the phenomenon by creating taxes on advertising signs. Today there are only a few examples of medieval insignia left and they continue to inspire the imagination of many, especially writers of fantasy books. Who knows how much the sign of Ollivander, the famous magic wand shop frequented by Harry Potter, will have cost in taxes. 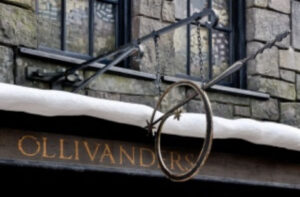 What about the printed ADV? For that, we will have to wait for the invention of printing. Despite Hapù’s attempt, in fact, reproducing advertisements to be distributed in large numbers required a good number of scribes. 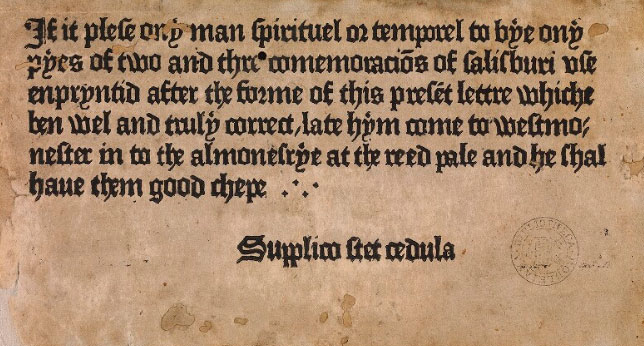 Following the discovery of Gutemberg, advertising timidly began to evolve trying to exploit movable type. A bit like when contemporary advertisers realized that social networks could also be used for advertising purposes.

The first Copywriter in history was William Caxton, an English printer, who in 1479 published an advertisement promoting spa treatments in Salisbury.
Small curiosity. The English word we use for advertising iwas born in the same period as Caxton. At the time, this term indicated the announcements of auctioneers in the squares.

However, we still have to wait another century and a half before we see the invasion of print advertising. 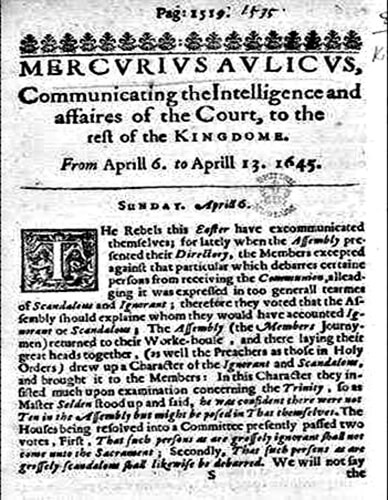 In 1600, thanks to the spread of the Gazzette, the first advertisements on commission began to appear, commonly called réclames. In short, the first sponsors in history.

An example is found in the Gazzette of 1631 by Théophraste Renaudot (Loudun 1586 – Paris 1653) where we find the insertion of Forges mineral water. 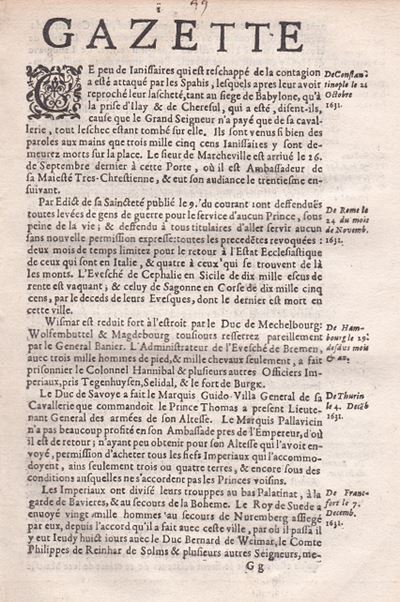 Throughout the 1700s, advertising had found its permanent place on the fourth page of newspapers.

In 1840, the first advertising agencies arose in America, dealing with mediation between customers and newspaper editors.

Also, with the increase of factories, the process commonly referred to as “mass consumption” began.
If first everything was sold in bulk and by weight, manufacturers began making their products in small doses, such as bars of soap, packs of pasta, and cigarettes. All wrapped in printed and stamped paper. In short, we are witnessing the birth of logo design and packaging. The product wraps had to be pleasing to the eye, displaying the parent company’s brand.

In the same period, the so-called “advertising prints” began to become an increasingly widespread fashion. The crisp air of modernity was perceived in the European capitals and artists and designers began to give free rein to their creativity thanks to this vehicle. It was a cheaper way to get artists to work. The realization of a print had lower commission costs than those of a painting.

These posters are still considered to be of great value today and many of them were made by well-known artists, such as the “Chat Noir” day hotel advertisement, which bears the signature of Henri de Toulouse-Lautrec. 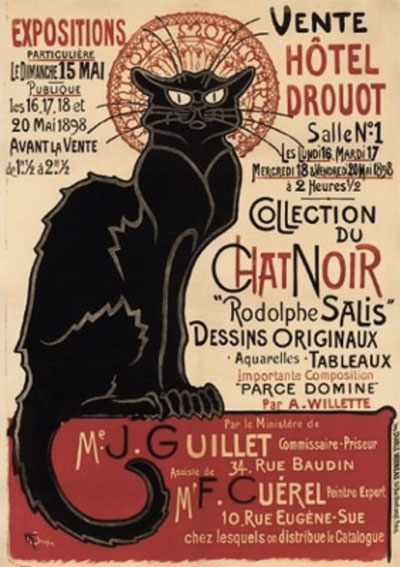 THE INVENTOR OF “OUT OF HOME” ADVERTISING

The authorship of this revolutionary advertising vehicle goes to the painter Jules Chéret. He immediately understood the importance of the image and its ability to attract attention more than words.
Thus it was that in his life he created more than a thousand posters, helping to convey what had now become an art form. For the first time in history, painting had entered into dialogue with the masses of the people. The refined visual arts found a perfect cradle at the end of the industrial revolutions. Appreciated by all, bought by everyone.

The “merit” of having introduced women to the world of advertising also goes to the noble Chéret. The female representation of advertising posters was born thanks to him. 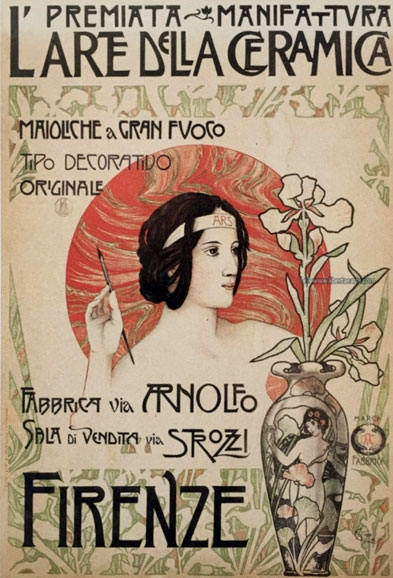 The choice of this element owes its origins to the artistic currents of the time. Romanticism and Neoclassicism, in fact, placed the feminine at the center of their artistic language. Just think of Eugène Delacroix’s “Freedom that guides the People” where a woman depicting freedom and the homeland leads her people with bare breasts, or Manet’s “Breakfast on the grass” where a girl converses with two young people bourgeois and looks at us without being ashamed of her naked body.

In short, advertising has been the main engine of communication for centuries.
Even today, thanks to the invention of radios, televisions, and computers, it continues to be one of the most present elements in our life.

In the last century, we have seen the birth of large agencies and of women and men who, with their creative talent, have contributed to the birth of contemporary advertising. But we will talk about this in the next posts.